During my Bachelor and Master studies at Jacobs University I was a member of the Visualization and Computer Graphics Lab headed by Prof. Linsen. My main research interests included point-based graphics and multi-variate visualization. Below you can find short abstracts and videos of the projects I have worked on, as well as a list of publications:

Compact Representation of the Isosurface Spectrum for Efficient Isosurface Rendering

Isosurface extraction is a widely used approach to visualize volumetric datasets. Since the original Marching Cubes algorithm, many techniques have been devised to improve the quality of the extracted surfaces or improve the speed of extraction. Some of them achieve extraction in real-time, but the quality of the extracted mesh is not optimal. Other focus on maximizing quality, but are not suitable for interactive applications.

We propose an approach that aims to visualize high quality isosurfaces and still provide real-time experience to the user. The mechanism behind the technique is to pre-compute high quality isosurface meshes for a set of isovalues and only use interpolation for rendering. First, we sample the isovalue range, pick an initial isovalue and extract the isosurface for it. To keep the correspondence between the vertices of two consecutive isosurface meshes, we rely on projection. Starting from the initial mesh, we project its vertices to the implicitly defined isosurface for the next sampling isovalue. This is repeated until the whole range of isovalues is covered. After each projection, the mesh is smoothed, refined or simplified if needed. This way we make sure to keep the quality of the triangles high. The results of the pre-computations are stored in data structures that allow for efficient computation of isosurface meshes for arbitrary isovalues.

We propose a novel intuitive, yet powerful user interface for interactive visual exploration of multi-variate volume data. Our approach relies on hierarchical density-based clustering of the high-dimensional feature space. The result of the clustering is presented in a tree structure. The interface, apart from the volume rendering window, consists of two parts: a hierarchical tree widget and a parallel coordinates widget. The hierarchical tree widget employs a 2D radial layout of the cluster tree and provides intuitive techniques for assigning material properties to clusters, changing the size of clusters, and merging and splitting clusters. The linked parallel coordinates widget shows a representation of the selected clusters in parallel coordinates and allows for brushing of regions of interest. We automatically map the user selections to a proper multi-dimensional transfer function for 3D texture-based direct volume rendering. Since the user operates in cluster space, as opposed to transfer function space, the proposed approach is suitable for data with a feature space of arbitrarily high dimensionality and the complexity of the user interaction does not increase with the number of dimensions.

We propose a method for point cloud rendering with transparency and shadows at interactive rates. Our approach does not require any global or local surface reconstruction method, but operates directly on the point cloud. All passes are executed in image space and no pre-computation steps are required. The underlying technique for our approach is a depth peeling method for point cloud surface representations. Having detected a sorted sequence of surface layers, they can be blended front to back with given opacity values to obtain renderings with transparency. These computation steps achieve interactive frame rates. For renderings with shadows, we determine a point cloud shadow texture that stores for each point of a point cloud whether it is lit by a given light source. The extraction of the layer of lit points is obtained using the depth peeling technique, again. For the shadow texture computation, we also apply a Monte-Carlo integration method to approximate light from an area light source, leading to soft shadows. Shadow computations for point light sources are executed at interactive frame rates. Shadow computations for area light sources are performed at interactive or near-interactive frame rates depending on the approximation quality. 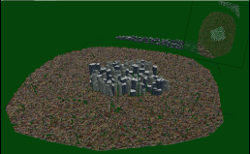 There are a lot of existing Computer Aided Design (CAD) tools that help engineers and artists design rooms, buildings, or even whole residential areas, but there are very few that aid the design of an entire city. The proposed project aims to provide a tool that will enable users to model and then visualize large cities. During the modeling phase, the user is able to outline on a map the different areas (industrial, residential, commercial) that build up the city. After that the tool procedurally fills those areas with appropriate roads and buildings and in the final step visualizes the 3D model of the city. In visualization mode, the user is able to explore the city freely by changing camera position and orientation. Since displaying all buildings at once would require an enormous amount of resources, the tool also support different levels of details and employs rendering optimization techniques .

In Proceedings of CVPR2008.

My contribution to this work was developed during an internship at Max-Plank Institute for Informatics, Saarbruecken, Germany. For more information on this project, please visit the website of Naveed Ahmed, who supervised me during my stay there.

We present a new passive approach to capture time-varying scene geometry in large acquisition volumes from multi-view video. It can be applied to reconstruct complete moving models of human actors that feature even slightest dynamic geometry detail, such as wrinkles and folds in clothing, and that can be viewed from 360 degrees. Starting from multi-view video streams recorded under calibrated lighting, we first perform marker-less human motion capture based on a smooth template with no high-frequency surface detail. Subsequently, surface reflectance and time-varying normal fields are estimated based on the coarse template shape. The main contribution of this work is a new statistical approach to solve the non-trivial problem of transforming the captured normal field that is defined over the smooth non-planar 3D template into true 3D displacements. Our spatio-temporal reconstruction method outputs displaced geometry that is accurate at each time step of video and temporally smooth, even if the input data are affected by noise.